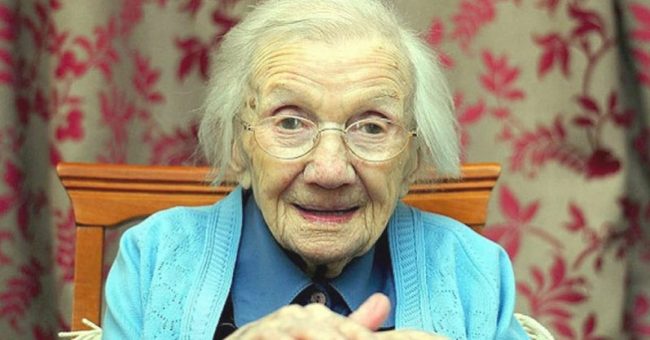 Helen Hayes once said: “Mere longevity is a good thing for those who watch Life from the sidelines. For those who play the game, an hour may be a year, a single day’s work an achievement for eternity.”

While we all end up complaining about life and our everyday problems at the end of the day,  is beautiful, and we are all trying to find a way to somehow increase our lifespan and enjoy a few more years.

Some try regular exercise, a healthy diet, meditation, quitting bad habits like smoking, juicing, and more. However, these are some of the most bizarre pieces of advice for long life from centenarians:

Jessie Gallan, a centenarian who passed away in 2015, had the strangest formula to longevity- avoiding man! Born in 1906, in a family with five sisters and one brother, this Scottish girl has lived a simple life,   sleeping top-to-tail each night on a straw-filled mattress.

She claimed they didn’t worry about anything, their mother made their clothes, their father worked the cattle, had no money, and lived a very fulfilled life.

In an interview with STV News on her 108th birthday, she said that her secret to a long life was staying away from men, and not skipping a healthy breakfast, such as porridge.

Elizabeth Sullivan was 104 when she revealed that Dr. Pepper was her secret. She explained that she started drinking the soda when she was about 60, three times a day. Her doctors warned her about the excessive consumption, but she outlived them all, and passed away in her sleep on November 1, 2017, at 106.

The world’s current oldest person is Kane Tanaka from Fukuoka, Japan, at a whopping 116 years old as of June 11, 2019. He lives in a nursing home in a great condition, and claims that his longevity is due to his family, hope, and sleep.

When presented with her Guinness Book of World Records certificates in March, she also got a box of chocolates. She quickly opened it and began munching on. When asked how many chocolates she wanted to eat that day, she immediately replied, “100”!

Well, what I believe in is that you need to find your own cure, your own medicine, and your own magical elixir that will ensure longevity, and it will definitely be the thing that makes you happy in life!