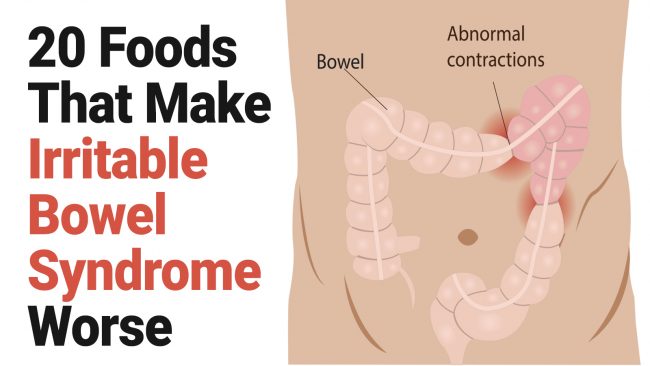 About 15% of people in the US suffer from irritable bowel syndrome (IBS), which is a chronic functional gastrointestinal disorder.

Even though it is caused by the abnormal work of the GI tract, there are no discernible structural abnormalities, and tests come back as normal. Scientists believe that IBS sufferers have different bacteria in the gut, which affect a patient’s ability to digest certain foods.

This issue is more common in women than in men, and its symptoms include:

Irritable bowel syndrome can be treated in various ways, and they all include lifestyle changes.

Also, making dietary changes is often one of the most effective ways to treat it. Doctors recommend a low FODMAP diet for IBS patients, which stands for Fermentable, Oligo-, Di, Monosaccharides, and Polyols.

The treatment and preventative measures are similar in people with IBS and participants at higher risk for developing IBS.

A gluten-free diet is often one of the first lines of defense, as this protein can cause irritation and illness in those who have a sensitivity to it, or to those who have Celiac disease. Moreover, consider the following dietary tips:

Other dietary tips include:

Additionally, make sure you exercise regularly, as a study has found that physical activity lessened IBS symptoms. Also, even though stress is not identified as a cause of IBS, it undoubtedly aggravates the symptoms of this disorder. Therefore, you should find a way to release tension and relieve stress, and try yoga, meditation, walking, reading, or whatever works for you.

If you already suffer from irritable bowel syndrome, your doctor has surely prescribed medications such as antispasmodics for diarrhea and a trial of probiotics or laxatives for constipation, depending on the symptoms. You might also be instructed to take antidepressants to relieve the symptoms.

Moreover, patients should avoid the following 20 foods as well:

1. Dairy products can cause symptoms like constipation, diarrhea, bloating, and cramps in lactose-intolerant patients

2. Wheat contains gluten and fructans, a type of carbohydrate-related to fructose, which can trigger INS symptoms

3. Cruciferous vegetables like kale, cauliflower, and Brussels sprouts, are high in a sugar called raffinose that its digested with difficulties

4. Vegetables that contain a lot of FODMAP carbohydrates, such as beets, leeks, garlic, onions, mushrooms, asparagus, can trigger IBS symptoms

5. Fruits with pits, like cherries and peaches, are rich in fructose, which is one of the FODMAP carbohydrates

8. Beans and legumes are hard to digest due to the high amounts of carbs

9. Chocolate contains numerous ingredients that can cause IBS, like caffeine, milk, and lots of sugar

11. Fried and fatty foods are rich in fats which are difficult to digest and disrupt the balance between the gut bacteria in the stomach

12. Processed foods are fatty and hard to digest, and are rich in artificial sweeteners and food additives

13. Red meat is hard to digest, so focus on fish and poultry

14. Rye is rich in fructans and triggers IBS symptoms

15. Alcohol is differently digested in the body than other foods, so it reduces the function of the digestive system and creates abnormally high amounts of stomach acid, which make the stomach unable to ward off bacteria

16. Foods rich in fiber can aggravate IBS symptoms in some cases and can increase gas and bloating

17. Corn is rich in sugar and fiber, and it is difficult to digest, so replace it with creamed corn or corn bran

18. Carbonated drinks increase intestinal gas and cause bloating, as well as an imbalance in the gut bacteria

19. Chewing gums are rich in artificial sweeteners that worsen the symptoms, and leads to air swallowing, which causes intestinal gas

20. Spicy foods made with red chili peppers contain capsaicin that can lead to stomach pain and increase the GI tract’s motility