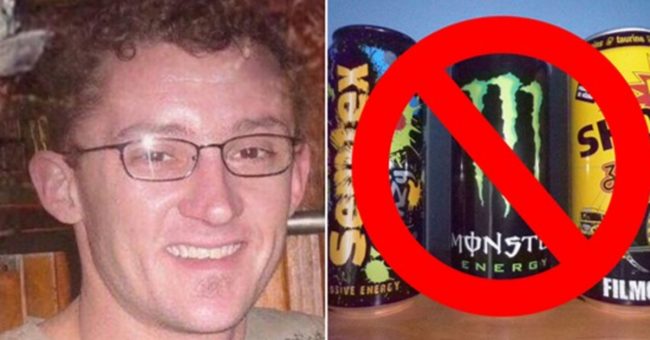 A family from Perth, Australia, was tragedy-struck in January 2014, when the 35-year-old son, Michael Clarke, died as a result of caffeine toxicity.

His mother Shani warned him about his excessive consumption of energy drinks when she saw how many cans he had in his truck, but unfortunately, he didn’t pay attention to her words.

Michael used to drink at least four 500ml cans of energy drink a day — as well as four to five cups of coffee.

A few weeks later, he was found slumped behind the wheel of the 11 tonne truck on the side of the road in Perth, after experiencing a massive heart attack caused by caffeine toxicity.

You know the weekend is just around the corner when…Frosty Berry Friday.

She had also seen him buying multiple packs of these energy drinks at a time. Yet, a single can contains 160 mg of caffeine, while the daily limit according to the FDA is 400 mg.

Michael was complaining about indigestion before he died, and the coroner said the indigestion could have been mistaken for a mild heart attack.

Shani says that she was very angry to find out that it was caffeine that killed her firstborn and it could have been avoided if he hadn’t drunk so many of these drinks without a break. Michael’s body couldn’t process the caffeine anymore so it built up in his body and it led to a massive heart attack.

Michael’s death devastated Shani, so she decided to do something to prevent such tragedies from happening, and educate others on the possible perils of consuming too many energy drinks.

Therefore, she created the Caffeine Toxicity Death Awareness Facebook group. People in the group discuss their addiction and raise awareness of this issue and the possible adverse effects.

Energy drinks and other caffeinated beverages can lead to numerous side effects, especially if consumed in excessive amounts. Therefore, to prevent any health concerns, it would be best to completely avoid, or at least limit, their use.