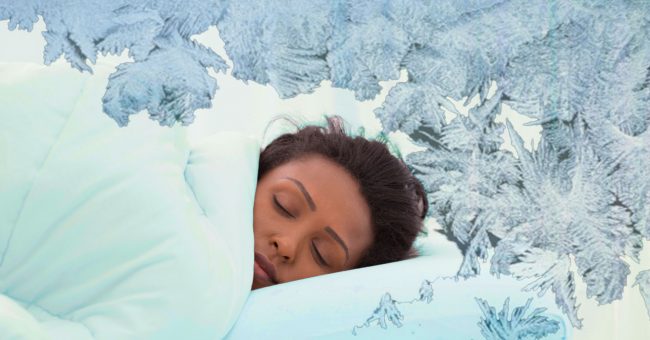 Many couples argue over the temperature in the bedroom, but we are here today to reveal that the one who likes it colder at night, is actually right.

Dr. Christopher Winter, medical director at Charlottesville Neurology & Sleep Medicine, claims that there are several reasons why you should keep your thermostat between 60-67 degrees F while you snooze.

Namely, he has found that if the temperature falls below or climbs above that range, one will toss and turn more during the night, and get worse sleep.

Apparently, the human body has a natural, 24-hour cycle in which the temperature rises in the late afternoon and drops to the lowest point around 5 am. As the body temperature drops, we become more able to fall asleep.

Therefore, a cold bedroom will encourage and support high-quality sleep.

Researchers from the University of South Australia have also confirmed that a cold room leads to more restful sleep, and have also linked poor body temperature regulation to certain forms of insomnia.

Additionally, sleeping in a cold bedroom will also help you look younger, as a temperature warmer than 70 degrees stops the melatonin release in the body.

Since melatonin is a powerful antioxidant with the ability to cross the blood-brain barrier,  it has been found to prevent Alzheimer’s and aging of the brain.

Keeping the room colder at night will also boost your mood, and the reason has to do with the link between melatonin and serotonin. Serotonin, a known mood-enhancer, is also the precursor for melatonin, so their increased levels in the brain make us feel happier and rest better.

According to a naturopathic doctor, Natasha Turner,  healthy sleep patterns and a predictable temperature drop support the release of the growth hormone and lower stress hormone levels, a combination which additionally helps weight loss.

One study even found that it could decrease the risk of metabolic disease such as diabetes.

So, do not hesitate to turn down the thermostat and enjoy your deep and restorative sleep tonight!